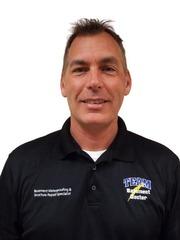 I served in the United States Army before attending the University of Cincinnati.  I started working in the construction business as a Carpenter/Owner Operator of a small business.  I have experience in framing and foundation construction, with over 100 homes built in the late '90s.

I enjoy meeting all of our clients and solving their problems.  I find pleasure in finding solutions for our customers and helping them put this part of their lives behind them, move on, and let go of all the worries.

I like to have fun and enjoy life.  Golfing, traveling, going to concerts and sporting events, spending time with friends and family.

I live in Maineville, Ohio.  I have two children and a cat.

Customer Reviews
About Me
Testimonials
from customers I've helped!

PowerBraces to stabilize a bowing wall in...

House on a hill that has water intrusion in Ft...

Falmouth, KY Water leaking into a...more »
Before and after photos from jobs I've worked on:
Back to Previous Page Back to Meet The Team