A Villa Hills, Kentucky homeowner was having problems with water seeping into the finished basement after a heavy rain.  The homeowner met with Walt, a Certified Inspector, who recommended that WaterGuard Basement Waterproofing System and a TripleSafe Sump Pump System is installed to resolve this problem. WaterGuard Basement Waterproofing System is a piping system installed in the floor along the foundation walls.  The WaterGuard intercepts the water that is seeping into the basement and drains it into the sump system to be pumped out of the basement.   The sump pump system that Walt recommended for this home is the TripleSafe Sump Pumping System.  As the name suggests, the TripleSafe is a three pump system.  The first pump is a Zoeller 1/3 hp pump and this is the primary pump.  It will do the pumping most of the time.  If this pump becomes overwhelmed, pump 2, a Zoeller 1/2 hp high volume pump will start up.  Both pumps working together can remove 6,200 gallons of water per hour out of the basement.  Pump 3 is a DC Operated Pump.  If the power fails the UltraSump turns on operating on battery power to remove water from the basement.  It comes with its own battery and charging station. 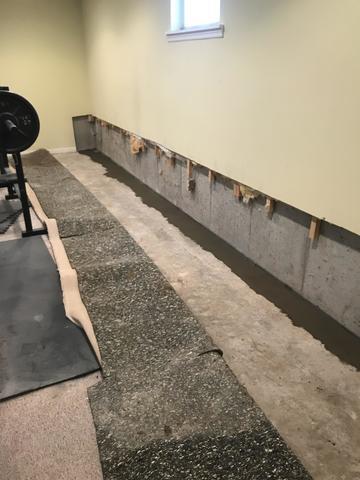 WaterGuard Basement Waterproofing System has been installed along the foundation wall. This will intercept the water that is seeping into the basement and will be pumped out of the basement through the sump pump system.