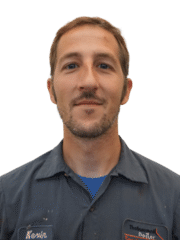 Kevin is a Foremen at The Basement Doctor and has been here since 2017.  Kevin grew up in Florence and now lives in Forest Park with his two dogs, which are Whippets.

Kevin is a former circus performer traveling around performing various skills like juggling, fire spinning, whip cracking, the bed of nails, and even flying trapeze.   He has since gotten older and has a slightly less physically demanding job here at The Basement Doctor.

Kevin is a Foreman running one of our Polylevel trucks used to level driveways, sidewalks, patios, etc.  He enjoys the satisfaction of seeing a once crooked, uneven, broken concrete slab level, and even again.  Helping keep people's Mother from tripp8ing and breaking a hip all across the tri-state.

In his spare time, Kevin likes to hang out with his dogs and train them in dog sports, agility, dock diving, racing, disc.  If his dogs can be involved, then he is interested.

Customer Reviews
About Me
View all Reviews

A building on a slab foundation had a sunken...

PolyLevel Injection System is used to level a...

A driveway that had uneven slabs is repaired...

PolyLevel Injection used to raise a porch in...

WaterGuard and SuperSump to resolve water...

Before and after photos from jobs I've worked on:
Back to Previous Page Back to Meet The Team