We installed a WellDuct Window Drain, WaterGuard Basement Waterproofing System, and a SuperSump Premier Sump Pump System for a homeowner in Independence, Kentucky.  A WellDuct Window Well Drain is installed on the inside of the foundation wall.  The Window Well Duct allows water to flow out of the window well, down into the WellDuctand drain down into the drainage system, such as WaterGuard.   WaterGuard Basement Waterproofing System is a piping system that is installed into the floor along the foundation wall to intercept water that seeps into the basement.  The WaterGuard will drain the water into the sump pump system unseen by the homeowner.   The SuperSump Premier Sump Pump System is a 1/3 hp pump that can pump up to 2,650 gallons of water per hour out of the basement.  It also includes the WaterWatch Alarm, SuperLiner and Airtight Lid. 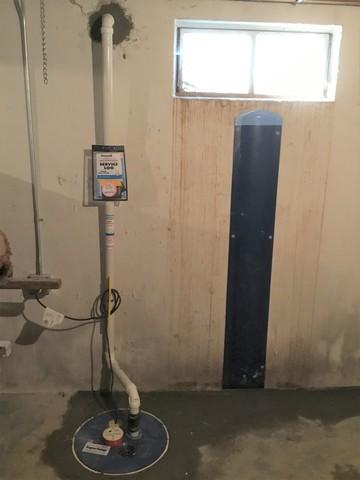